According to a recent report by the Pew Research Center that I, ironically enough learned about because it was shared on Twitter, “an estimated two-thirds of tweeted links to popular websites are posted by automated accounts” also known as bots. 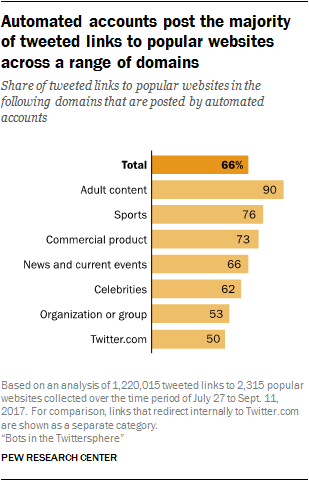 To me, this means three things:

Popularity on Twitter means very little if you are trying to measure actual engagement with your message. It is highly likely your perceived popularity on this platform is driven by automated accounts, which is sort of the equivalent of a television add getting viewed by hundreds or thousands of empty seats in a movie theatre. Sure there could be people in the seats, but until you actually know how many people have bought a ticket, your message is like Schroedinger’s cat.

Research that scrapes popular posts on twitter for either academic or market research purposes is bound to be simply inaccurate. Sometimes you can identify the bots and remove them, but if bot activity accounts for up to two thirds of activity on the most popular links, websites, or hashtags, then that means that two thirds of the data you collect is potentially suspect. Unless you’re studying the behavior of automated accounts. In which case, please go back to doing whatever it was you were doing.

On Twitter, bots are clearly the new influencers. In fact, on social media generally speaking, the consensus is that influencer marketing is not producing the returns that it used to (if you don’t believe me, just listen to the latest edition of Canadaland). Maybe influencers are too expensive anyway – in fact they probably are. So don’t invest in influencer marketing, just try and game the bots, or better yet, create bots of your own to drive your influence. This will make other people think you’re really popular on Twitter, which will probably get you a higher influence in the end.

Or maybe not. Perhaps in the end it will just be bots talking to one another about things that bots like to retweet. Perhaps we should welcome our new bot overlords now, so that we can remain in their good favour. Or maybe we should just recognize Twitter for what it is: a sort of funhouse mirror of society that is tilted by the bot behind the curtain. Less important than whether your message is hot or not, then, is really the question of whether your message is bot, (bought) or not.